For a friend's wedding we had to find a way to wrap a gift we were going to give to the happy couple. With inpiration from PICing4fun's microcontroller based secret box we decided to construct our own secret dice. As for the size, bigger was better, this gave us enough space to fit all the parts. Eventually a 20x20x20 cm impressive dice was handed over at the wedding accompanied by a handful of more or less meaningful hints that would reveal a secret code. We also did the kind request not to butcher the dice with a flame thrower or crowbar and suggested to figure out the clues during their upcoming honeymoon. 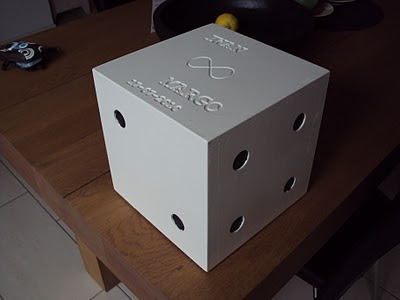 The basic idea is to turn the dice according the code. When the dice is turned exactly according the code with the right number on the dice facing up, the lit will be unlocked and reveal the goodies that are put inside. The lit is locked by a simple hobby servo, a clever constructed mechanical tilt sensor checks for the right state the dice is in and an always popular Atmega88 does the thinking. 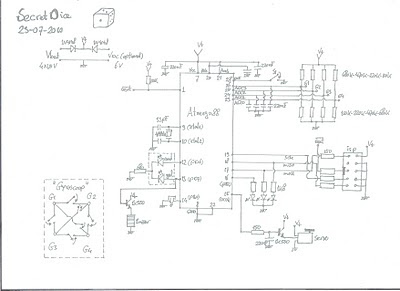