After building the first version of the secret dice in Deddies lab, it was time for an upgrade; Secret d'Icey!
Secret d'Icey has the same functionality as its bigger brother, but has some interesting upgrades: It is smaller, lighter, and has a nice chrome 'Icey' look (some coasters from the Ikea do the trick here)*. 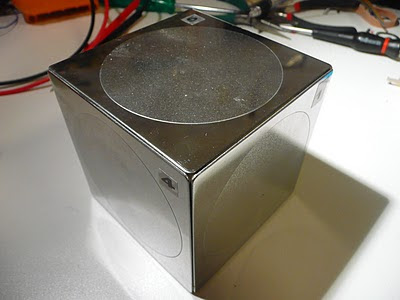 The batteries are easy accesible without giving access to the secret stuff inside. So no auxillary power connection needed to be included here in case the batteries run flat. A three dimensional accelerometer instead of a homemade tilt sensor is used. Another new nice feature is the automated power off function. When the dice is not used (change of dice state) for 30 seconds the power is shut off automatically. The same webshop that provided the accelerometer also had in store a tiny (robot) controller with an Atmega328 on board. This little device is originally designed to control a small robot, but was also very suited for the Secret d'Icey. The dual H-bridge seems overkill, but the single transistors in the H-bridge proved to be very useful.

* Okay, at the moment this secret dice doesn't serve a higher purpose and is probably destined to stay a piece in the Deddies Lab hall of fame, so I may as well tell you the secret code: 6, 5, 4, 3, 2...... the last number is up to you. 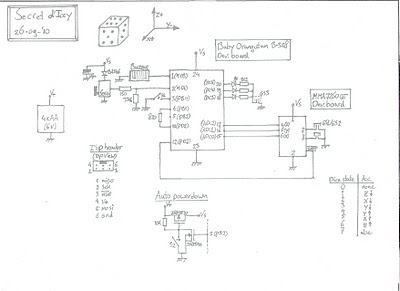