Mystery LED in a box: part 3

Still we don't have the contents of the wedding present that was given to us on our wedding party. Along the way we found clues telling us to exentend the electronics board with a pushbutton and most recently to fill all 128 bytes of the EEPROM with the hex value '0x03'.

To get to the EEPROM I added a 10 pins ISP header to the board to be able to connect it to my programmer. This gave me also the nice opportunity to read the fuse and lock bits to anticipate for any other surprises. Hmm, no surprises here (was I thinking too difficult again? Was I disappointed?), the fuse and lock bits were left alone and still had their default value. I also made a backup of the EEPROM and Flash memory to fix any possible screw-ups. 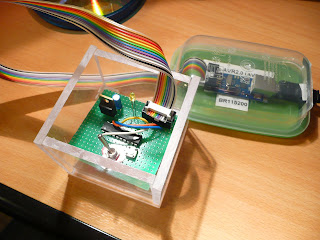 I used Codevision to read the EEPROM and changed it as requested. Yeehaa, a new Morse sequence!

After congratulating us with the achieved result so far we were presented a website for the next clue. Here the clue ended with a seemingly harmless reference to the coolest bumper sticker ever that hangs on the wall of Deddies Lab. Note taken!

So, a website. The tips&tricks section on the website gave us a link to the wikipedia site of morse code. We could have used that some time ago! Funny...

We were told to make a picture of the mystery box with today's newspaper to prove that the cube was still intact. Okay, I maybe broke it a week ago... but it is fixed now. The picture below will lead us further on our quest as promised on the website. 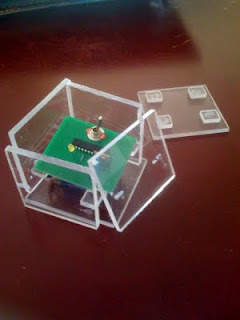 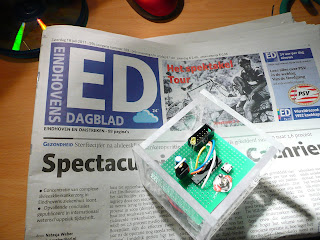 It is obviously that somebody is watching our moves. I suppose we have to be carefull with what we say the weeks to come. Hang on...