Mystery LED in a box: part 4

Days passed by since we fulfilled our last assignment considering the mystery LED box without any news. Did we do it right? Were we missing something? Last week the uncertainties suddenly vanished with a envelop that we found on our doormat. 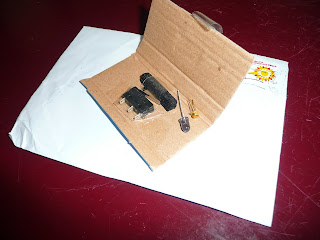 In the envelop we found some interesting parts: a micro switch, an IR led, and a BP103 phototransistor. I rushed to the website we found in the previous clue and there we found a new briefing. The 'Grande Finale' was about to take of... 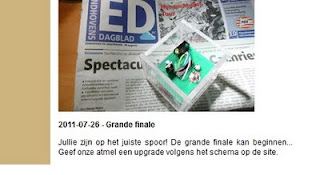 Again I had to add stuff to the already pretty stuffed up board and upload a new hexfile to the Attiny. I was asked to build an simple IR transmitter and giving the Attiny the capability to receive IR signals. Instead of one led the board now needed three leds.

The next evening I did my magic and a couple of hours later the mystery box was blinking again... 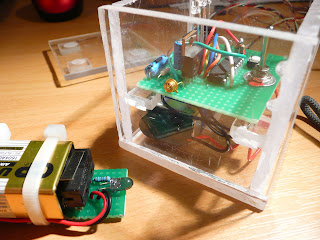 It started with a running light, followed by 1 minute of sequential blinking of the middle led, finished by the 3rd led turning on and off only once. Nothing after that, you could almost hear the Atmel sleeping :) In the video you can find the BP103 photo transistor in the box on the left.


Diligently I hooked up my ever so useful datalogger! Just before I started recording the new sequence like I did with the previous clues, my attention was caught by the middle led..... Damn! Rat bastards...... the sample rate of the led sequence was definitely faster then 4Hz this time and my datalogger is not capable of recording any faster. And reading the morse code with the naked eye is definitey out of question at those speeds. I knew I should have kept my mouth shut about this bug (or blog about it). Me and my big mouth! 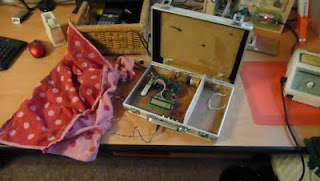 My friends' goal was definitely to slow down the progress solving the mystery box, apparently I was going to fast for them. Now I had to (quick) fix the datalogger first. And we were about to leave for vacation in a couple of days, were I was forbidden to even think of electronics or dream of Atmels. I agreed with myself to speed up the datalogger and get at least the next clue out of the mystery box before packing my bags.

From the datalogger's sourcecode I removed everything unnecessary that could slow down the recording. Wow, I did some realy awful programming two years ago. 4 hours and a lot of deleting and rewriting later I managed to get the datalogger to record with an astonishing speed of at least 40Hz. I didn't try to make it faster, a tenfold increase seemed fine by me. I figured my friends not to be that big of assholes... Luckily I was right. After recording and some minor changes to the Matlab script the next sentence popped up: 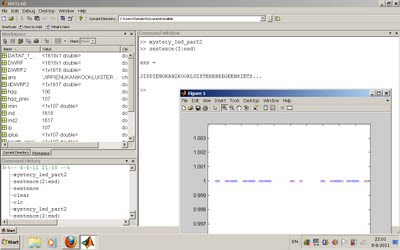 "JIPPIE NU KAN IK OOK LUISTEREN. ZEG EENS IETS..."
Like I already suspected with the IR led and phototransistor the box was now capable of also 'listening'. It 'asked' me to say 'something' to him/it. This 'something' I still have to find out. I really have to pack my suitcases now...

As you probably already have noticed, a project like this kind of grows on you. Like my 1 year old son it finally starts to listen and I start to understand its babbling. I hope I won't mix up the two, and find myself poking a soldering iron in my son's eye while the mystery box is getting a bath.

More after my vacation...