Mystery LED in a box: part 0

I could have expected it!

Last year we build this huge wooden dice for a good friend's wedding stuffed with electronics to prevent the newlyweds from getting their hands on their present too quickly. Two weeks ago it was my turn to tie the knot and guess what: The same guys that stood by my side last year putting the dice together now stood right in front of me all together to give me and the misses an interesting transparant box with some electronic parts in it. 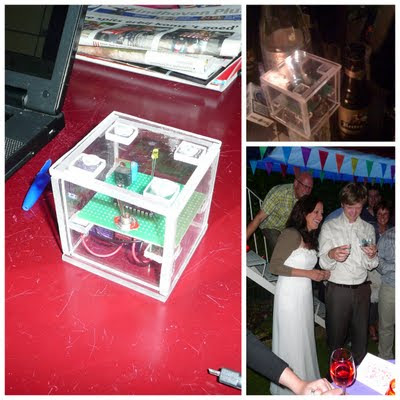 Besides a lot of air the little box was filled with a 9V battery, some voltage regulation with an 7805, an ON/OFF switch, an Atmel's Attiny2313 and a single yellow 3mm led. Although the beers tasted good that evening it didn't take me too long to come up with the idea of flipping the switch. What could such a tiny Atmel do, not considering the fact that the battery could be half filled with explosives ending the party a bit sooner as expected? Luckily for us our friends indeed had only good intentions (so far), and the yellow led started blinking quite decently.


That was it. No big speech afterwards, hints, tips or tricks. The music started playing again, everybody grabbed their beers and we stood their holding a little transparent box with a small blinking yellow led like it was our first born baby. Luckily at the end of the party we got a little hint. Despite the kind of nerdy content of the present we were told that Rianne (my wife) will play a big part in finding the solution...

My (our) task is to figure out if this box leads us to any clues concerning our wedding gift. Supposing their is indeed a wedding gift besides this small box worth approximately 10 euros.