Mystery LED in a box: part 6

How do you respond to a sentence like the following:

Anyone? Nobody? ANYthing? The last clue kept us busy for a few weeks.
Shortly after presenting the world our latest progress we found a rather scary letter in our mailbox: 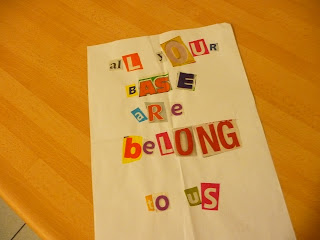 "All your base are belong to us". Not only one of the most famous internet memes ever but as from now also a big hint to solve our mysterious sentence that should lead us to our wedding gift. Googling it didn't result in a lot of usefull stuff other then a huge amount of odes and also parodies to the subject. After a week of puzzling, googling and trying to tear some usefull information from my friends a little birdy (Thank you!) remerbered my of a mental note that I took during part 2 of the queste. The clue of part 2 ended with the number 64 ("VIERENZESTIG"), which was not intended for that assignment. It seemed a bit lost standing there, but I kept it in mind. Maybe it is usefull here.
Adding '64' to the Google search string 'All your base are belong to us' didn't actually give me something new (except some way too nerdy Microsoft stuff). But hurray, my luck changed when I shortened the string to 'All your base 64'. It showed me various leads to the term 'Base64'. Base64 is an encoding/decoding method that uses a base of 64 characters to encode 8 bit ASCII data. It has various applications and it makes a normal sentence look like it is heavily encrypted. For that it is also used to obfuscate passwords. The Wikipedia site showed with a small example how to decode Base64 encoded data, and manually decoding the first part showed my the first letters of my own name, so I knew I was going the right way. Base64 is not very difficult to encode/decode so there has to be somebody that already made a script for the world wide web. Lucky me!
There was only one thing. Base64 encoding makes a distinction between small and capital letters while Morse code doesn't make this distinction. That was an easy one. It immediately explained the apostrophe ( ' ) characters in the mysterious sentence. A letter followed by an apostrophe means a capital letter, otherwise it is used as a small letter. 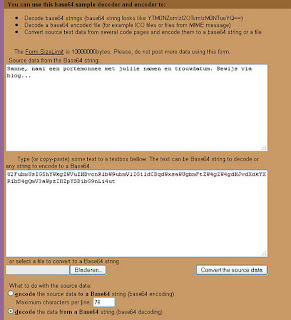 
(Sanne (That's my nickname), sew a wallet with your names
and wedding date. Show the proof via the blog...)


The assignment is a wink to my wife's hobby: Sewing and other sorts of crafting. In part 2 she had to do some soldering on the mystery box, so now it was my turn. And here is the result... And yes, it is geeky and nerdy! 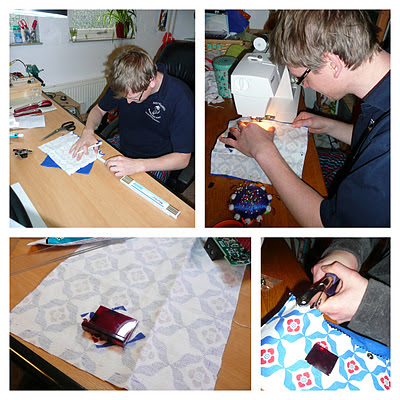 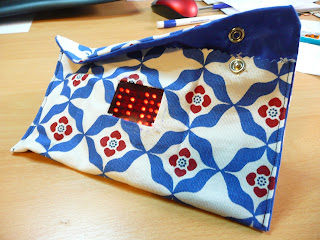